Ho Chi Minh city – or so-called Saigon has no long been an odd destination for visitors travelling to Vietnam. With its modernized areas together with antique parts in the south, Saigon is famous for being the heart of economy of Vietnam and the integrated zone for many cultures. In Saigon, you are free to venture across the city, starting from the heart of the city– District 1 to the suburbs.

Indeed, you cannot go around Saigon in a day or two. So, take district 1 for your first trip here to settle down after a long flight. Bringing your native friend as local tour guide. Because all of these places are particularly close to each other so walking is more recommended that helps you to simultaneously exercise while enjoying the city views.

And if you are clueless of where to go, take this sample of 1 typical walking day in District 1 as a preference. And of course, it is advisable to visit each location in its bustling time of the day for more fun. Let’s gooooo!

Thanks to its special architecture, rich spirituality & history from 1863-1880 by French colonists, Saigon Notre Dame Cathedral is one of the most favorable landmarks in Ho Chi Minh city. Standing among the modern building in the site, its red through times has been turned into fresh orange-red bricks emphasize the uniqueness of the spot itself. The most focusing point of the building is its two identical 58-metre bell towers in which there are 6 bronze bells ringing daily. 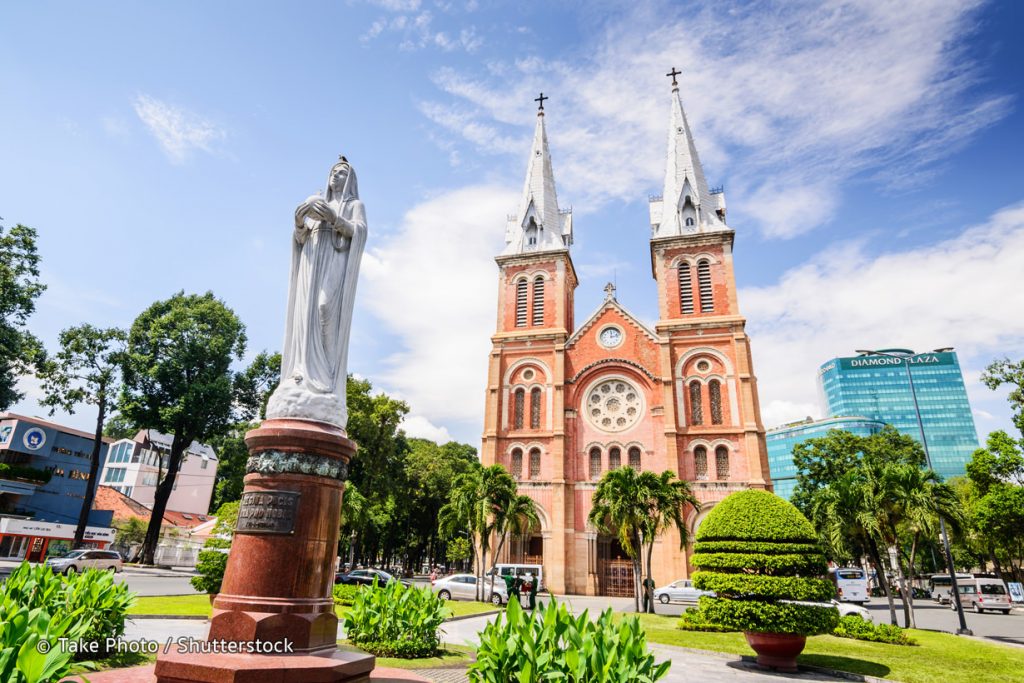 Furthermore, visitors can join masses organized on a weekly basis. 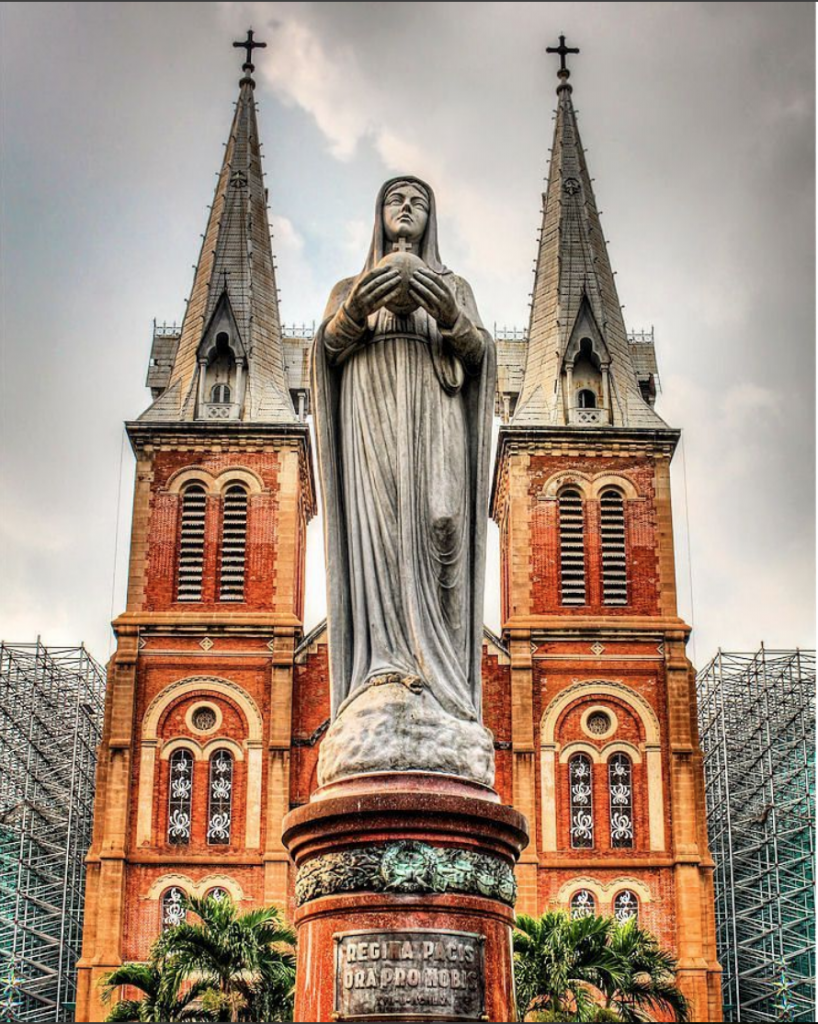 Currently, Saigon Notre Dame Cathedral is undergoing large-scale renovation. The renovation is estimated to be done by the end of 2019. Hence, for safety purpose, guests are not allowed to visit.

Being in close proximity to the Cathedral and Reunification Palace, Saigon Central Post Office gain huge flow of visitors everyday. The Saigon Central Post Office was built during the 1886-1891 period, featuring the essentiality of the post office in the old days with looping arches, intricately designed marble floors and outworn telephone boxes all serving. Painted on the walls overhead are two maps, one illustrating the telegraph lines that go across Veitnam and Combodia, and the other one showing a map of Saigon in 1892. 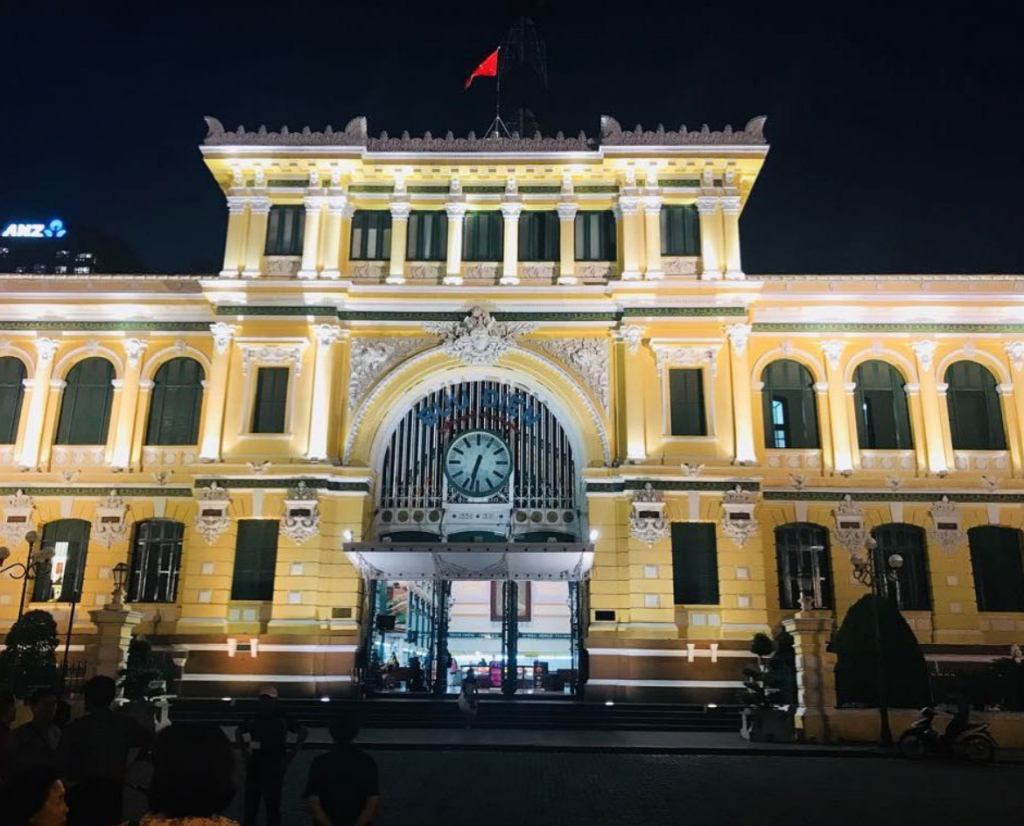 Describing a short glimpse into history, the post office is still functional which can sweeten the experience of every visitors by sending postcards or letters from here to everywhere around the globe. Besides, there are two different sectors on the two sides of the main hall, selling souvenirs, postcards and lacquerware. However, the price is much inflated and they can be easily found in other places with relatively cheaper price.

The new building for Ngo Dinh Diem – the Saigon old president who was killed by his own troops in 1963 – was named Independence Palace and was home to the succeeding South Vietnamese president, Nguyen Van Thieu, until his hasty departure in 1975. Designed by Paris-trained Vietnamese architect Ngo Viet Thu, it is a distinct example of 1960s architecture, with airy and open atmosphere. 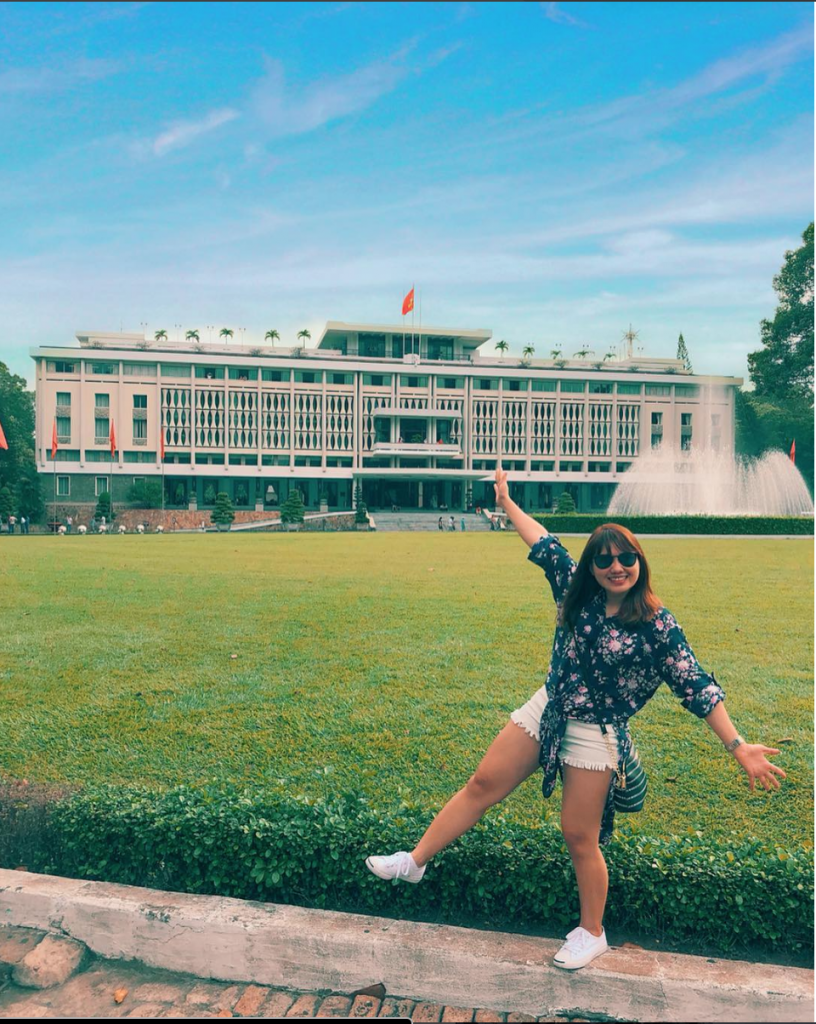 The building is featuring meetings rooms on the ground floor, a grand set of reception rooms on the first floor, a shagadelic card-playing room with a cheesy round leather banquette, a barrel-shaped bar, hubcap light fixtures and groovy three-legged chairs set around a flared-legged card table on the second floor and a cinema with nightclub on the rooftop.

What makes this place so fascinating is the telecommunication centre in the basement, war room as well as warren of tunnels. There are videos playing in a cinema room at the end of the hall apprasing the palace together with its history in Vietnamese, English, French, Chinese and Japanese.

Completed in 1898, undergone after a revolution of two years 1996-1998, the theatre is now a luxurious venue for high-profile national and cultural events or activities of the city in general. Certified as a national relic in 2012, this magnificent building stays on top of the must-visit in Ho Chi Minh city.
In particular, it carried out 3,200,000 square meters in total areas. The oval auditorium is echo-free with a total of 468 seats, thus preserves all the sound inside the theatre. 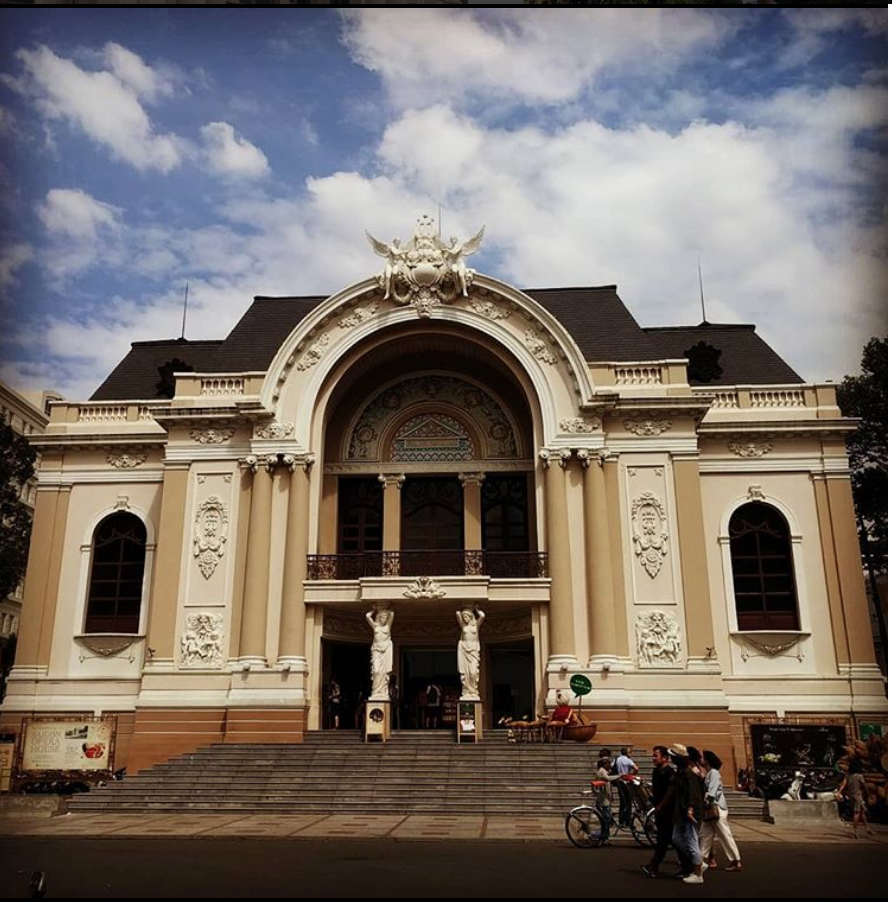 Turtle Lake is not a natural lake, but a small pond with fishes, fountains, some monuments and tower resembling lotus. The reason why this place is called “Turtle lake” while there is no TURTLE here at all is that there was a turtle statue on the lake before. 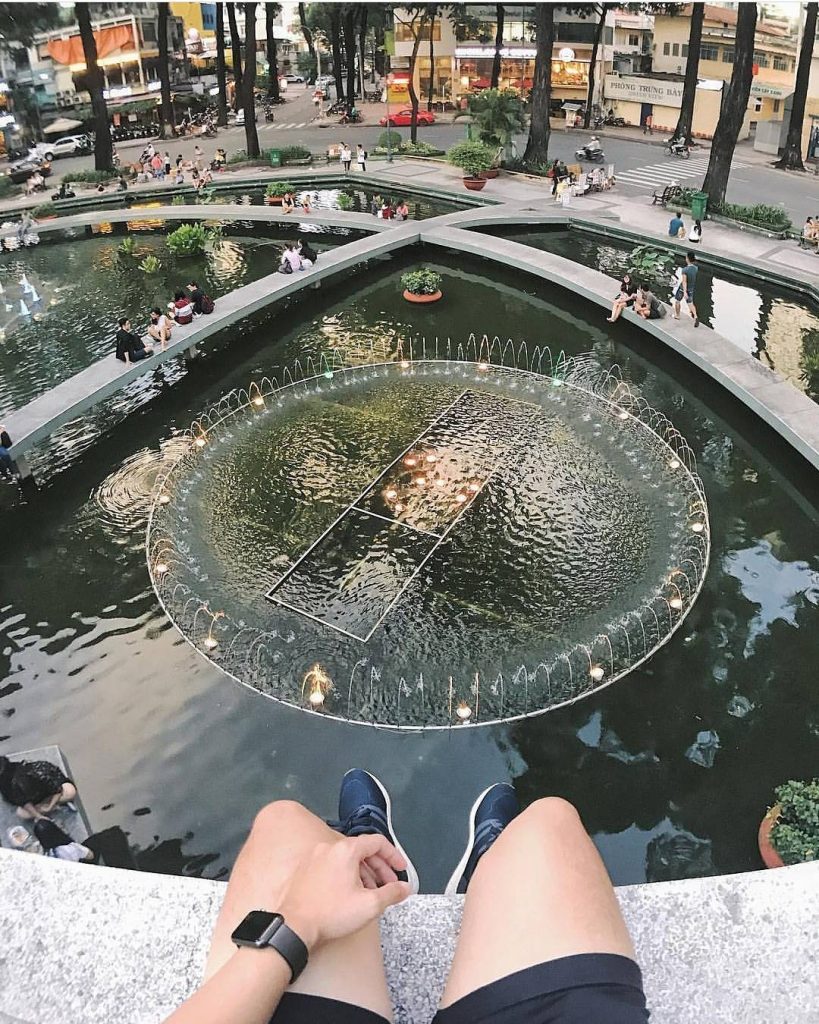 This place is said to be linked to the Independence Palace. It was built by president Nguyen Van Thieu (succeedor of Ngo Dinh Diem) in 1967. When he became the president of Republic of Vietnam in the South, he ordered a Chinese fen sui master to research the location of the Independence Palace. Afterwards, the master reported that the dragon’s head was at the Independence Palace while its tail was located at Warrior Square (which is the International Square nowadays). According to him, the dragon represented the destiny of the government. It was asleep at that time, and if we woke up and swished his tail, the government would collapse. Therefore, Nguyen Van Thieu said to buit a lake with a turtle statue at the place where the tail of the dragon stood with the hope of country being settled.

Here you can find street food around the lake at night and there are Vietnamese people who can tell you about Saigon.

You can visit the market during both daytime and nightime.

For shoppers, this is suggested to go in the morning and the afternoon to pick up bargains including lacquer ware, bamboo goods, Vietnamese arts, crafts as well as other souvenirs. Clothes, textiles, luggage, watches and an assortment of electronic goods are on sale here. You can sometime ask the seller to decrease by half of the price; however, be noted that there are still some items with strictly fixed price. 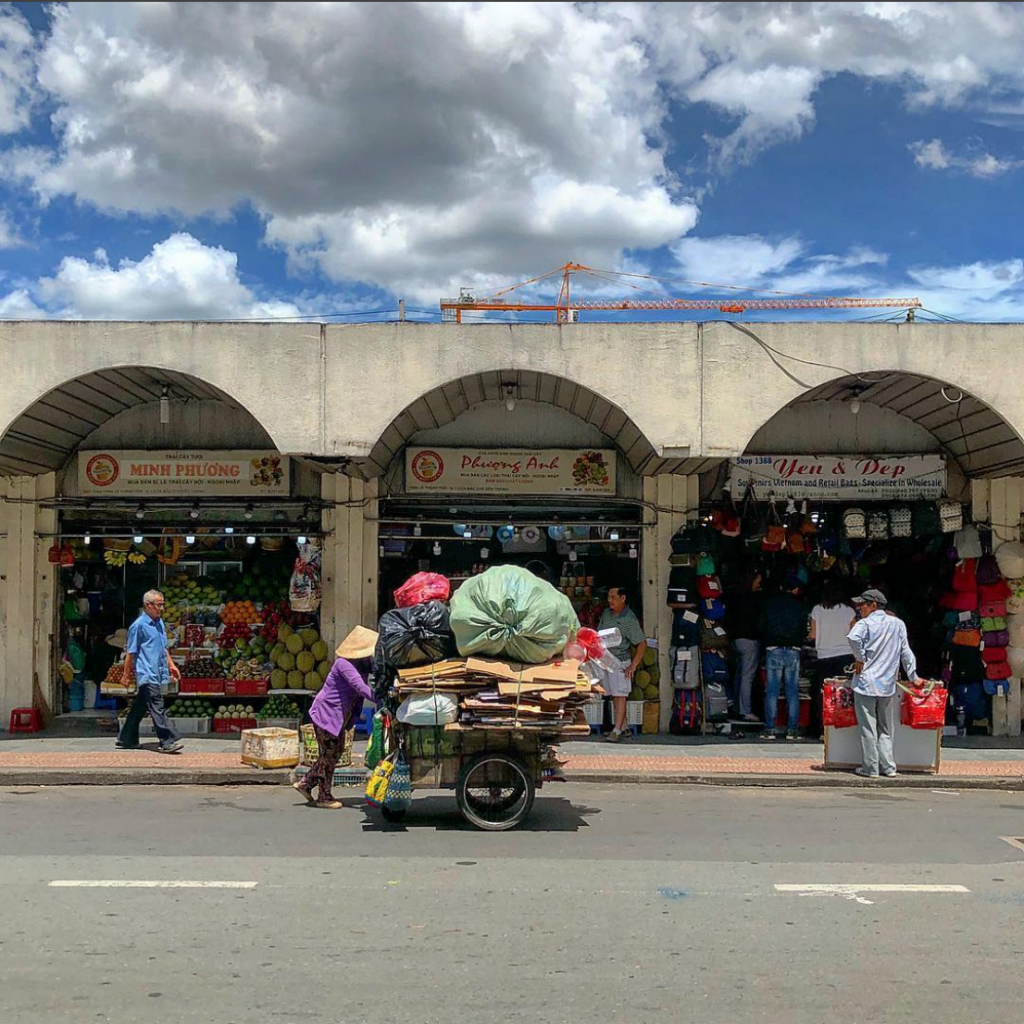 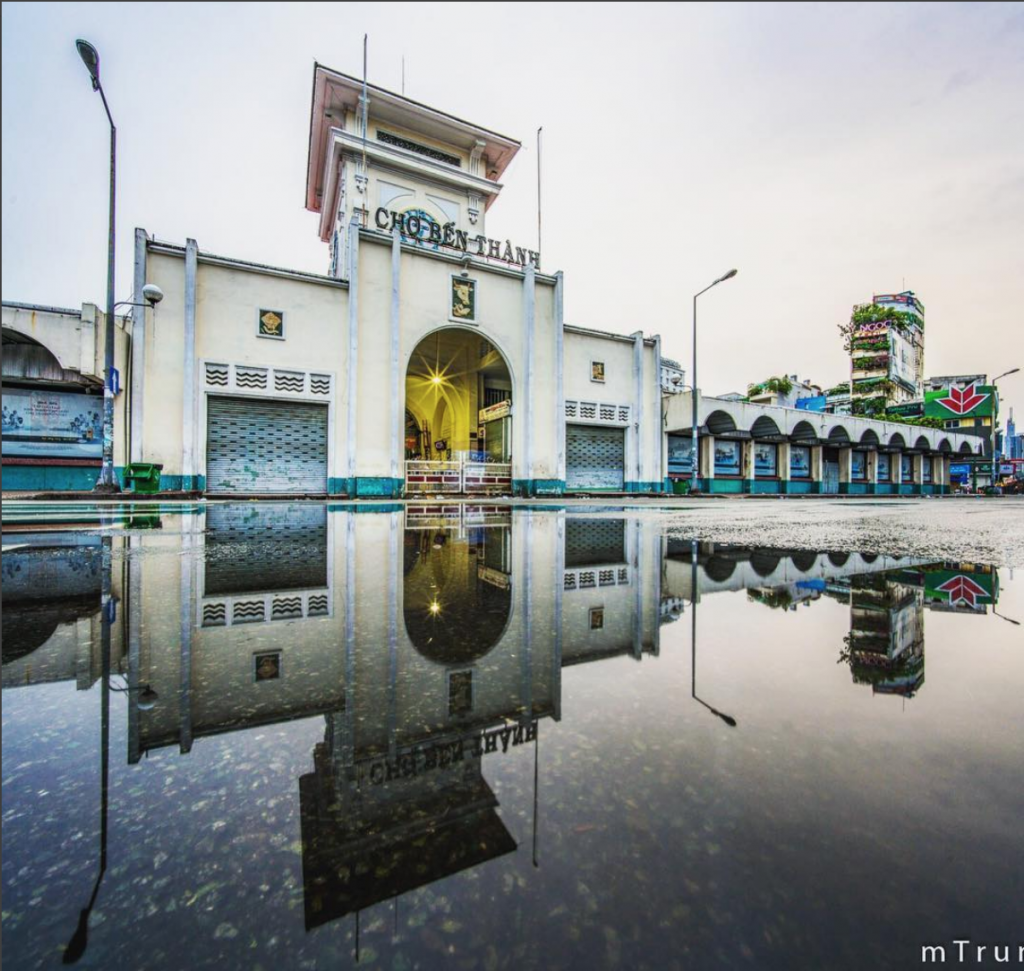 The night-life Ben Thanh Market is vibrant with shopping and many kinds of real local street food at one of the 20 or so eateries. Chef will cook in front of you with an endless array of cuisine choices including vegetarian noodles, fresh seafood, crispy rice pancakes and steamed cakes.

Nguyen Hue walking street is a broad walking promenade where flanks are filled up with superb French colonial architectures like the People’s Committee, the Rex Hotel and a luxury shopping mall. At one end, visitors can find Uncle Ho statue and a fountain show at night. At the other end of the street is the Saigon River where you can immerse yourself in nice views. There are night bars and restaurant along the way. 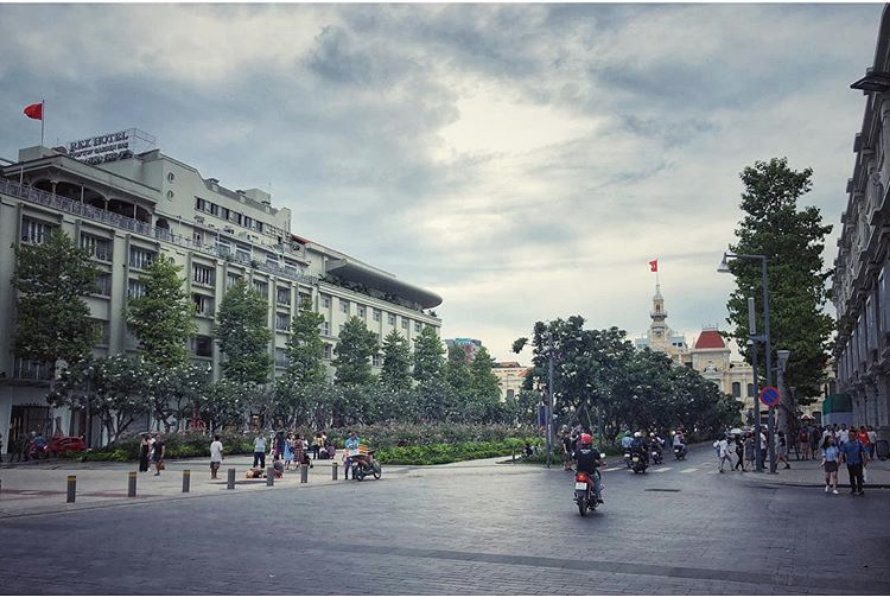 At night, this street is always crowded with people from other districts, mainly young people and families. Taking a seat right on the road, eating street food and chatting are the daily-life activities.

Making 6 different kinds of Vietnamese coffee? A piece of cake!